Last year’s Best of Show, chosen by juror Alyssa Monks, was awarded to Candice Chovanec from Grand Rapids, MI for her oil on canvas titled “My Mother and her Daughter”.

$11,000 in Cash was awarded to “Best of Show”-Cindy Rizza, (pictured below), Second Place-Sylvia Maier, and Third Place-Geoffrey Laurence, with the Award of Excellence by Fine Art Coinnesuer Magazine to Emily Copeland.

Winners were announced on the evening of October 11 at the Reception for the Artists, from 6-8pm, featuring juror Frank Bernarducci, owner the Bernarducci Gallery in New York. 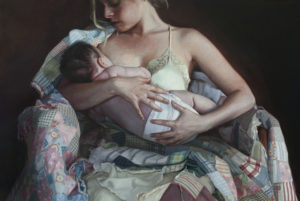 CONGRATULATIONS to this year’s Accepted Artists;

Sylvia Maier “Does Anybody Care”

Laura Tilden “Least of These”

John Hyland “The City has Stories to Tell” & “Oracle of Delphi”

Honorable Mention for “What did I promise you”

Honorable Mention for “Holding On”